A diagnostic laparoscopy is a surgical procedure in which a thin, lighted tube (called a laparoscope) is inserted through an incision in the abdominal wall to examine the pelvic organs. To diagnose certain conditions, your doctor needs to look directly into your abdomen at your reproductive organs. Diagnostic laparoscopy is often used to diagnose causes of abdominal pain, including ectopic pregnancy, endometriosis, cysts, adhesions, fibroids and infection, as well as causes of infertility. 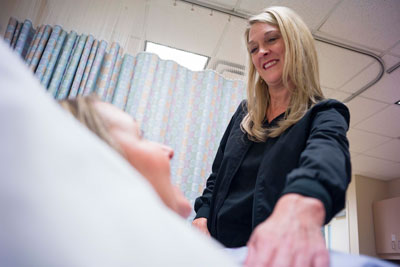 In addition to using a laparoscope to look into the abdomen to diagnose a problem (diagnostic laparoscopy), your doctor can also use the procedure for treatment. Laser laparoscopy is a common surgical procedure used to treat a variety of conditions causing pelvic pain; a medical laser is attached to the laparoscope to assist with surgical treatments.

Laparoscopic hysterectomy is a procedure to remove the uterus through a few tiny incisions in the abdomen below the navel. Sometimes the ovaries and fallopian tubes are removed at the same time, a procedure called “salpingo-oophorectomy”. We perform three types of hysterectomies at our surgery center:

Laparoscopic Supracervical Hysterectomy (LSH)
Is an option that uses laparoscopy alone to remove the uterus, but leaves the cervix intact. During the procedure, a laparoscope and small surgical instruments are inserted through tiny incisions in the navel and abdomen. Using these instruments, the surgeon is able to carefully separate the uterus from its pelvic connections and from the cervix. The uterus is then removed through one of the incisions.
LSH is less invasive than traditional “open” hysterectomy and has many advantages. It was developed to reduce pain and trauma to the body, minimize scarring, and shorten recovery time.
Total Laparoscopic Hysterectomy (TLH)
Is very similar to the LSH except the cervix is removed along with the uterus. Oftentimes the organs are removed through the vagina. Like LSH, TLH is less invasive than traditional “open” hysterectomy.

Laparoscopically Assisted Vaginal Hysterectomy (LAVH)
Is a procedure that removed the uterus and cervix through an incision inside the vagina-but also includes the use of a laparoscope (a thin, lighted telescope) which is inserted through a tiny incision in the navel and abdomen. Use of a laparoscope allows the upper abdomen to be carefully inspected during surgery and allows the surgeon to perform part of the surgery through incisions leaving small scars. Tubes and ovaries may be removed if needed by this technique.

Hysteroscopy (with or without endometrial ablation)

A hysteroscopy is a procedure that allows your physician to look inside your uterus to help diagnose or treat a uterine problem. A thin, telescope-like instrument (called a hysteroscope) is inserted into the uterus through the vagina and cervix. A hysteroscopy is usually performed just after menstruation to obtain the clearest view of the uterine cavity. Endometrial ablation is a procedure used to control abnormal bleeding by destroying (ablating) the uterine lining.

Dilation and curettage (D&C) is a surgical procedure used to locate and treat abnormal bleeding. A D&C is performed by passing a small instrument (called a curette) through the vagina into the uterus and scraping the lining of the uterus (endometrium).

A tubal ligation, or female sterilization, is a surgical procedure that involves tying, cutting or blocking the fallopian tubes so eggs cannot travel down the tubes to be fertilized or to implant in the uterus.The surgery center currently uses the blocking technique.

Laser ablation of condyloma (genital warts) involves the removal of the growths or bumps, which can appear on the vagina, vulva (external parts of the genitals), cervix (the opening between the vagina and womb), rectum or groin. Genital warts are spread by a sexually transmitted virus.

The NovaSure® endometrial ablation system is an ablation technique that is a potential alternative for treating women with excessive uterine bleeding. The NovaSure® system is a short, one-time procedure that treats menorrhagia (heavy bleeding) by permanently removing the lining of the uterus through the quick delivery of radio frequency energy. To learn more about NovaSure®, click here.

A biopsy is the removal and examination of tissues, cells or fluids in order to diagnose diseases. Your gynecologist may perform a biopsy on the following areas: vulva, vagina, perineum, ovary, cervix or endometrium.

Follow us on social media for news, service updates and eventsShare